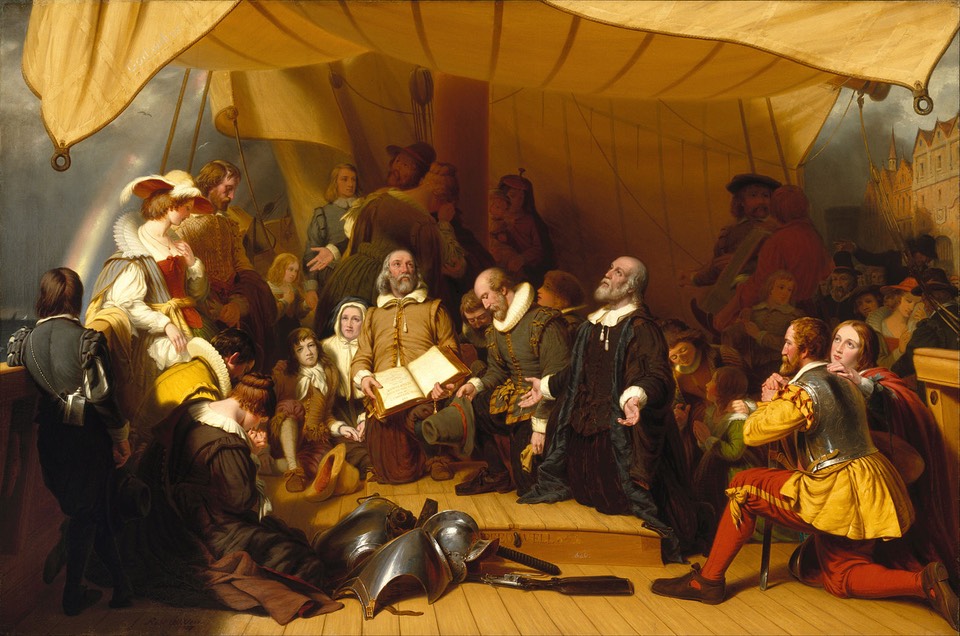 It was an epic adventure that was gloriously improbable and wonderfully hopeless. Such things were these people’s stock-in-trade.

They were a God-fearing group of souls in the most literal sense of the phrase. They gave their children names like “Fear” and “Patience” and “Love” (a boy) and “Humility” (a girl) and “Constance” and “Desire.” They worshiped God in ways their grudgingly tolerant neighbors thought peculiar and unforgiving authorities condemned as heretical. Constables could set upon them without warning, and clerics could toss them into dungeons and all but throw away the key. The England of James I — a dour Scot who embraced Anglican conformity to defy his Presbyterian forebears — did not want them, but under statutes that were old but rigidly enforced, England would not let them leave. They were simple in dress, plain in manner, and pious in their belief that God loved common folk best when they didn’t act like Catholics while calling themselves Anglicans. They were cloistered in little communities that huddled in bustling London or sought refuge in the villages of Gainsborough or Scrooby. Because of their persistent belief that only by leaving the place of their birth could they find peace in God’s promise, they came to be called Pilgrims.

And it was as Pilgrims that they ran from England to the closest place that would have them, which was across the channel in the Low Country of Holland, where it was said you could do anything as long as you left the dikes alone. The London and Gainsborough Pilgrims had already escaped to Holland when the Scrooby faction risked treacherous or cowardly Dutch sea captains and managed to trickle into Holland as well. By the end of 1608, the fifth year of the reign of James I, almost all of them had assembled in Amsterdam where the late-coming souls from Scrooby were dismayed that none of their other brethren could get along with one another. To escape the constant quarreling, the Scrooby Pilgrims removed to Leyden where authorities ignored them, and the community gradually embraced these good, tidy neighbors.

Life was far from easy, but at least it did not feature random beatings and systematic arrests. For eleven years, the brethren living in Leyden held off poverty with rigorous frugality and constant industry, and gradually, they prospered. But the sadness that had followed them from the English homes of their ancestors — the sorrow they had always thought would fade with time — remained as a cloud, and but for that, they might have stayed in Leyden for good, and our story would end.

Most of them concluded, though, that being thoroughly English in mind, if not in faith, they were to be forever strangers in a strange Dutch land, no matter its habit of tolerance. So they looked west at the vast ocean and contemplated a place to which almost nobody else wanted to go. North America was not for the faint-hearted, for it was a perilous proposition in even the best of brochures. Two previous colonization attempts were not encouraging. Sir Walter Raleigh’s Roanoke venture in the 1580s had vanished without a trace. The settlement at Jamestown in 1607 on Chesapeake Bay alternated between starving to death and getting massacred.

Nevertheless, the Pilgrims in Leyden dismissed these risks and put their minds to finding a sponsor who could fund their journey to a wilderness that they were sure was only waiting to become the Promised Land. Finding a moneyed entity, however, that would overlook their religion in the first place and then let them freely practice it seemed an insurmountable obstacle. Then a group styling itself the Merchant Adventurers came up with just enough money under barely acceptable terms. The Pilgrims took a breath and accepted both.

Under any terms, it was indeed a remarkable moment. The funding arm of this impossible undertaking was very adventurous with money, for the Pilgrims’ project was a gamble with very long odds. But everyone was willing, the Merchant Adventurers to pay, and the Pilgrims to die, and thus it was that a tiny little fragment of humanity embarked on an epic adventure that was gloriously improbable and wonderfully hopeless. Such things were these people’s stock-in-trade.

It was why they jammed themselves into a little 60-ton vessel named Speedwell, men and women and children alike cheerfully following their leaders William Brewster, William Bradford, John Carver, Edward Winslow, Isaac Allerton, Samuel Fuller, and for good measure a burly chap named Miles Standish. He was a Lancashire man in his mid-30s, a professional soldier by trade and an alien to the brethren but destined to become their most stalwart friend. It was July 1620 with a fair season for good sailing pending, but only if they sailed soon. That this didn’t happen was the beginning of a lengthening list of mounting troubles that grew into an unbearable ordeal.

To start with, the Speedwell leaked like a sieve and barely got them to Southampton where they were to meet the Mayflower, a larger but still tiny London bark of 180-tons burthen commanded by Captain Thomas Jones. He was a superb mariner, but he had a shady side that also figures into the story.

Jones already had some additional passengers aboard the Mayflower. The Merchant Adventurers were inclined to believe that Pilgrim piety could go only so far setting up a community in the North American wilderness. They hired artisans to do the heavy lifting while the Pilgrims prayed. The conditions of this agreement included the right to return to England after their jobs were done. One of these artisans was a young cooper (a barrel maker) named John Alden who fully intended to see England again, the sooner the better.

Some Pilgrims began thinking the same thing. Setting out as late as August 15 was bad enough, but the Speedwell soon had to turn back for repairs, and even after those, her pumps could barely keep her afloat. She was finally sent back to London, her part of the adventure over, and carrying 18 Pilgrims who had succumbed to second thoughts about the entire project. The Mayflower took on the balance of the Speedwell’s passengers, which brought her number to an overcrowded 102, and at last weighed anchor on September 16 to head for the open sea. Storms fell upon the little ship almost immediately. Vicious winds tore at the rigging, shredded sails and raising waves of enormous heights. The troughs between were so deep that the Mayflower wallowed in them, groaning in the eerie quiet away from the shrieking gales, becalmed for long seconds before beginning her agonizing ascent to the crest of the next wave, and the next, on and on without cease for two months. The Pilgrims prayed, watched one of their number die, and found solace when Elizabeth Hopkins survived labor to bring aboard a baby boy that she and husband Stephen named “Oceanus.”

On November 21, 1621, on the 67th day out of Plymouth, the Mayflower came ‘round the curling jut of land called Cape Cod and found calm waters for anchorage. It was freezing, the sign of an unforgiving winter to come, and the coast looked forbidding. It was gray with rocks, densely wooded, and cluttered with scrubby growth. Jones, as it turned out, had been bribed by the Dutch, who were anxious about interlopers around their settlements planned for the Hudson River. He landed his passengers far north of their intended destination, but the Pilgrims did not know this, and they rejoiced. It would seem that Captain Jones, seeing this strange stoicism from people he had derided as hopeless romantics easy to rook, experienced the first twinge of something resembling a conscience, long dormant in a hardened old salt. He resolved, quite out character, to stay the winter and provide as much help as his tiny ship could. The Pilgrims were not at all surprised. They tended to have this effect on people. Nobody was beyond redemption.

They methodically searched out a place to go ashore and begin their new lives. Before leaving the Mayflower, they took pains to avoid the kind of bickering and ruinous dissent they had seen in Amsterdam all those years before by setting up a model of self-government and ensuring equal protection and participation in it for everyone. They put this idea into writing and solemnly signed it as a compact, making theirs the first government in North America established by the consent of the governed. Elder John Carver signed the compact first, then William Bradford, Edward Winslow, Isaac Allerton, and Miles Standish. In fact, all 41 male emigrants on board signed the “Mayflower Compact,” including young Alden. For many, it was a solemn covenant. But even for those, like Alden, who thought the Pilgrims odd, it was a golden pledge, one that went far in make survivable the deadly months to come. In the place they called New Plymouth, half of these people would not live to see spring, but those who quietly died along with those who resolutely lived never lost heart. They were as soft as the glove of God. They were as hard as the rock they took as their symbol. Thus armed, they never lost faith.

John Alden was the youngest adult man of this company, and at first, he eagerly counted the days of his labor to the time when he could part from the odd Pilgrims and resume his life in England. As time passed, though, something about the people of this journey caused him to lay awake at night lost in thoughts about work, life, loss, and hope. He was a popular and trusted lad, bashful with girls and respectful of his elders, which was why one of the leaders took him in his confidence and asked for a favor. The wife of Miles Standish had survived the dreadful voyage but not the first awful winter. She died in January 1621, and the grizzled “old” soldier still had enough dash about him to be a pleasant prospect among the marriageable women of the colony. Standish felt awkward in the role of suitor, though, and he pressed Alden into service as his courier, the object of his affection a lass of uncommon beauty named Priscilla Mullins. She was confident but demure, aloof but kind, and Alden secretly adored her. But he knew she was far beyond the reach of a mere maker of barrel staves.

According to family lore, Alden dutifully spoke to Priscilla for his friend Miles Standish and nearly felt his heart stop when Priscilla slightly cocked her head and said, “Prithee, why don’t you speak for yourself, John?”

Perhaps it happened that way. But how ever it happened, young Alden should not have been surprised that among these peculiar people miracles would sprout in the darkest winters, that thousands of miles from his England he would find an English rose who could stop his heart with a question and start it again with the touch of her hand. How strange that the age of miracles had not passed, that so many of their number had died, but so many yet lived, and laughed. Even stranger that John Alden had started the journey as a wandering tradesman but ended it, though settled and never again to travel, a Pilgrim.

When he died at age 84 on September 12, 1687, John Alden was the last of those 41 who had signed the Mayflower Compact. He was also the patriarch of a thriving family and the founder of a household that still belongs to his descendants. Among them is a collateral line that produced John Adams. And another was started when his and Priscilla’s daughter Sarah fell in love and married Alexander Standish, a son of Miles. For such people, thankful in trial and grateful in tranquility, the age of miracles can never pass.