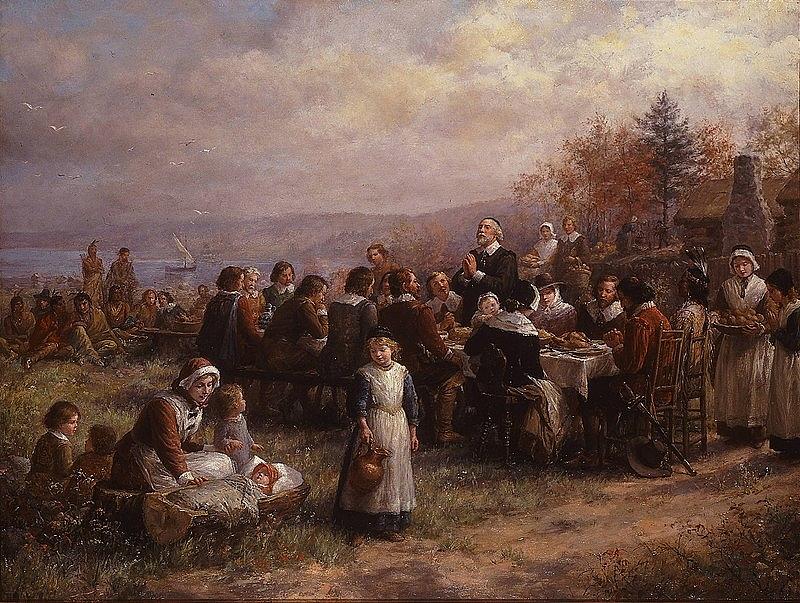 There is a scene in the movie The Blind Side, where the Tuohy family is preparing for Thanksgiving. Leigh Anne Tuohy, played by Sandra Bullock, has just taken in Michael, a high school football player whose life has been shattered by his mother’s drug addiction and his father’s abandonment. Michael has become little more than a refugee treading wearily down lonesome streets in foul weather looking for a place to sleep. That is how the Tuohys find him.

They are open and gracious with Michael despite cultural differences that include not only his radically different childhood but also the fact that he is a very large young man, as offensive linemen usually are. He also happens to be black and awkwardly out of place in their very white and upper-middle-class suburban home.

He doesn’t seem to understand Thanksgiving, especially as the mother, father, and children go about an odd retreat into a sort of ritualized solitude. They are together physically, but they aren’t really together at all. The television is blaring, football is coming on, she is cooking, the children are texting or playing video games, and Michael has suddenly gone missing. Leigh Anne finds him in the dining room, sitting at the unset table by himself, clearly sad. Leigh Anne doesn’t do sad, so she galvanizes, pulling her husband and kids away from their solitary pursuits. She has them set the table, and the meal, which is preceded by saying grace, is served in the formal dining room. The experience is so alien to Michael Oher that he can hardly fathom it. He likes it.

Given the way he finally experiences Thanksgiving in that home, he has every reason to. Over the years, the secularization of Thanksgiving has all but erased its original spiritual significance. The Tuohys’ habit of burying the occasion in a meaningless feast with sports events as a backdrop has become ubiquitous, but it’s instructive. The food is indulgent because it is bounteous without being blessed. Their time together is wasted by their frittering it away with gadgets and games. And their appreciation of each other is cheapened by their taking too many things for granted. The Pilgrims didn’t take anything for granted. Like Michael Oher, they were also refugees, treading wearily across an ocean looking for a place to sleep, out of the rain.

It is now fashionable to say that the first Thanksgiving where grateful Pilgrims yucked it up with helpful Indians is a bunch of hooey concocted by myth-making special pleaders still clinging to the notion of America as the shining “city on a hill.” But something happened at Plymouth that was memorable enough to lay the foundation of a tradition. The move to depict the event of autumn 1621 as nothing more than a “harvest festival” misses the point that everything these intensely spiritual people did had a religious aspect.

The Pilgrims were hardy travelers who got unceremoniously deposited on a rocky coastline and were thankful to have survived the journey as well as their North American debut. By the time Christopher Jones, master of the tiny Mayflower, landed them at “New Plimouth” in November 1620, they had endured awful weather, rampant sickness, and would see half their number perish in their first six months in the New World. These people, however, proved admirably resilient and resourceful. They credited God for giving them the strength, courage, and persistence to make one of the most inhospitable places on His good earth habitable.

It came to be held in November because a quite real work ethic dictated the doing of essential chores after the harvest. Everything had to be properly sorted and stacked, implements shaved of rust and oiled, preserves put up, and sheds, houses, and fences mended to lessen the labors of spring when the cycle of life began anew. After everything was done, and only after that, came the time to have the party to celebrate togetherness, give thanks, and cherish remembrances.

As the years wore on, these community religious celebrations became state-sanctioned holidays proclaimed by governors who set the date to suspend all governmental activity, staying the hand of process servers, for instance, and closing the courts. This bit of secularization was tolerable for those happy results alone. After the American Revolution, however, independence-minded citizens were troubled by governors acting like monarchs issuing proclamations. “To rally the church round the state” gave “the executive a dangerous and unconstitutional influence.” Citizens were vigilant about princely pretensions in those days, and only grudgingly did they concede that the gesture of proclaiming a day of Thanksgiving was, in the scope of all things, harmless enough.

How did this special day go in the Early American Republic? As with all things for flinty New Englanders, it was first-things-first, and Thanksgiving was no exception. It was first a day for religious observances because of Who was being thanked, and accordingly, it opened with a service and a sermon. Yet because it never fell on Sunday, it was not treated like the Sabbath and more resembled the way we celebrate Christmas.

After services, everyone prepared for the rounds of parties that made Thanksgiving a religious festival complete with an abundant feast. “Even the poor man’s board is covered in dainties,” wrote one approving newspaper editor, and true enough, the cornucopia was the order of the day in opulent Beacon Hill homes and modestly disposed households alike. Various pastries were washed down with cider, beer, and even stronger spirits. Eggnog was a favorite — called “flip” and sometimes spiked — whipped up by plunging red hot fireplace tongs into it before passing a communal cup around. A bonus was the comical foam mustache that flip left on upper lips.

Dinner featured a main course of poultry and wildfowl such as turkeys, geese, ducks, and chickens, but roasted pigs were also available. Pumpkins and apples were mainstays for pies and tarts. An estimate of New England’s Thanksgiving Day consumption in 1801 provides a picture of plentitude:

The day concluded with dancing, which was especially appealing to young men and women who were given more leeway than usual when the elders considerately retired and at least gave the appearance of getting rid of chaperones.

And then there’s the fiddling and dancing,
And gals! all cute as a whistle!
The fellows are kicking and prancing
Their legs are as limber as gristle

It was on limber legs bent when danced out, that kneeling boys popped the question on the night when all the girls seemed cute enough to merit a whistle and a wink and a chance to say yes, always to remember, whatever their answer, that at least they’d been asked.

The blind side, indeed, or as the matrimonial recorder for the Providence Gazette, and Moral, Political & Commercial Register put it one gray December day in 1818, these were the “Happy Effects of Thanksgiving:”

When winter’s chilling blast arrives
‘ Tis then that lads select their wives,
For this I’m told they give their reason
It helps to moderate the season

Whether on the stony shore of Plymouth Colony or in the rollicking barns filled with dancing youngsters of the Early Republic or the cozy Tuohy household with its unexpected guest, the tradition of giving thanks survives as a durable testament to the best of what is us, denizens of John Winthrop’s “city on a hill,” where gratitude and grace meld with compassion and courage, as “the eyes of all people are upon us.”