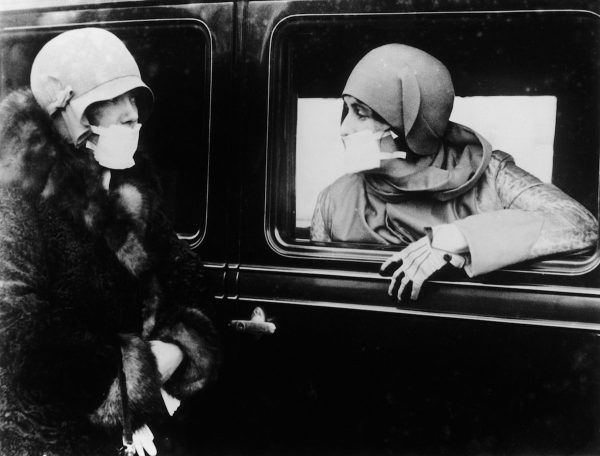 Of all the epidemic diseases, it is the most universal, [in] the rapidity of its march and extent of its range over land and sea, sometimes in both hemispheres and in different climates, in opposite seasons and in all varieties of weather, among all classes of people. — Richmond, Virginia, November 1772

Act I — The world gathers near a leafless tree

After breaking loose from Wuhan, China, our current iteration of the coronavirus took only a handful of months to spread panic and sickness across much of the world. Unprecedented lockdowns have crippled economies and have altered human relations. Nearly irresistible social pressures have caused people to keep their distance and cover their faces. State and local officials have bypassed legislatures and city councils to rule by decree. Meanwhile, the lockdowns have begun to raise more questions than they answer, especially when they create larger problems than the one they’re meant to solve.

Perhaps these responses to the pandemic were wise, maybe they were capricious, and possibly they were nothing more than exercises in raw power for sinister ends. None of this should surprise, however. Even apart from overtly political motives, a government will exert control as aggressively as allowed. It is a reality combined with another: people rarely voluntarily give up their freedom for a bad cause; and a third: those who want to take away freedom can always find a good reason to justify doing so.

Assailed by a highly contagious and potentially lethal disease impervious to routine prevention and treatment, people who are culturally habituated to risk aversion expect modern science and sophisticated technology to stop it. From that, however, a fourth reality has emerged: It is most likely that neither modern science nor super-sophisticated technology can do more than partly satisfy that expectation, and at worst, they cannot satisfy it at all. In such a state of affairs, the only certainty is that controversial political behavior and abundant medical disputes will ensue.

The response of the western world’s democracies to COVID-19 took its cue from the reaction to the so-called Spanish Flu a century ago, and for many of the same reasons. At first, the spectacular contagion of this new virus suggested a replay of that population cataclysm. Yet accumulating data indicate an overreaction. Dubbed by wags as “the Spanish Lady,” the virus of 1918 remains an unrivaled demographic catastrophe. Looking at the numbers, the Chinese coronavirus has not even come close and would have to accelerate its spread and mortality quite intensely to do so.

Numbers tell only part of the tale, of course. The reporting of cases and deaths during the 1918 pandemic is imprecise, and that of our time hasn’t been stellar. Also, confusion has hatched some dubious comparisons, such as miscalculating the Spanish flu’s case fatality rate to make it comparable to the Chinese coronavirus.

The case fatality rate (CFR) is not the overall fatality rate of the population. The CFR is the number of deaths that stem from confirmed cases. For example, the global death count for the 1918 influenza pandemic is immense by any reckoning, but among the lowest estimates is 50 million. That was 2.8% of the world’s population in 1918, which was 1.8 billion. On the other hand, the CFR for the 1918 pandemic was at least 10%, if the estimate of 500 million infections is correct. Yet, some specific medical journals as well the media in general have consistently and erroneously confused these two statistics by reporting that the CFR for the 1918 pandemic was 2.5% to 3%.

The world’s current human population is 7.8 billion, and so far, COVID-19 has caused approximately 900,000 deaths or .01% of the world’s population. To match 1918’s global death toll percentage would require around 200 million deaths, 200 times more than are currently counted. Even successive waves of a remarkable nature are not likely to yield numbers comparable to 1918-19.

The differing circumstances in the United States between the two pandemics is equally stark. In 1918, the United States had a population of 105 million people. The 1918 influenza pandemic killed .8% of that population, or 850,000. The current population of 331 million has suffered deaths at a rate of about .06%, or approximately 198,000 people, although the Centers for Disease Control and Prevention recently placed significant caveats on that tally. But even using the unadjusted record, more than 2.6 million additional Americans would have to die to match the percentage of 1918’s toll.

The only comparable population calamity to 1918 is the Black Death, which happened in the 14th century when doctors killed more often than cured and life, in the best of times, confirmed the Hobbesian formula of being nasty, brutish, and short. The world of 1918 had electric lights, telephones, automobiles, airplanes, and a host of other modern conveniences that were proof that material progress was real and rapid.

But the very modernity that seemed to shield the world from ancient perils had the consequence of perversely amplifying them. Advances in transportation helped spread influenza at previously unimagined rates. Training, quartering, deploying, and then demobilizing enormous armies to fight in World War I exploded contagion.

These and other factors were unique to that year, but we know that only in retrospect. At the time, when the unstoppable disease that caused death on an immeasurably vast scale suddenly assailed people in 1918, it stupefied them. Antibiotics would not be available until the 1930s, so secondary infections, such as pneumonia, weren’t treated and could become as lethal as the flu. Medical science helplessly watched the nightmare unfold, and authorities frantically implemented measures that have lately become all too familiar. State and local governments tried to limit the size of gatherings, canceled sporting events, shut down schools, and recommended general closures along with the wearing of masks. Some municipalities mandated masks.

The measures were unprecedented in aggressiveness but traditional in intent. American cities have had health commissioners since the late 1700s, and safeguarding public health with extraordinary rules for extraordinary situations is an ancient practice. But such restrictions have never been popular and were always difficult to enforce. In 1799, six years before Noah Webster published his famous dictionary, he compiled A Brief History of Epidemic and Pestilential Diseases to impress upon people the dangers of “the distemper” and “silence doubts in the public mind” about “legislative and police-regulations for presenting a return of the evil, or mitigating its severity.” Noah Webster could have been standing at a podium in 1918. He could have been holding press briefings this summer.

The fact of the matter is that influenza and its viral variants have been around forever. They have been making people sick to the point of death since the dawn of humanity. When medicine was a mixture of the occult and the barbarous, people attributed influenza’s annual visits and occasional epidemics to God’s mysterious plan that included comets, earthquakes, floods, and disease. It is as useful an explanation as anything modern times has contrived. Modern science knows a great deal more about the composition of the virus and has observed its erratic mutations, but it doesn’t know much about how these things occur, or why.

Influenza defies classification. It thwarts every effort to understand its cause, its contagion, and its uncanny ability always to be around but then suddenly spread itself everywhere in horribly malignant ways. It makes killing a caprice. It foils conventional methods of prevention, afflicting fastidious as well as slovenly people. It lays up king and commoner alike. It kills children in one epidemic but leaves them untouched in another. It visits annually in relatively restrained ways, but its broad scourges also occur frequently, though without a pattern, making predictions always worthless and preparations always inadequate.

“We cannot quarantine the air,” said a beleaguered public health official during the epidemic of 1889. He might as well have been speaking for all public health officials everywhere and at any given time. Meanwhile, in the recent rush to treat the Chinese coronavirus as mirroring the calamity of 1918, the world has come to resemble the two forlorn characters in Samuel Beckett’s play Waiting for Godot. During a first act that spans from last March, the world has been waiting for its dance with La Dama, the Spanish Lady, who apparently isn’t going to show up. The audience is impatient for the curtain to come down and intermission to ensue, wondering if the masks will then come off.

Expectations regarding the Wuhan pandemic response are reminiscent of the dreaded “word problem” from high school algebra:

Johnny boards a train with three apples for a trip of 234 miles. It takes Johnny 10 minutes and 30 seconds to eat an apple. He rests for 20 minutes before beginning another one. By the end of his journey, he has finished one apple and three-quarters of another. At what time does the train reach its destination? (Show your work)

Like all effective parodies, it’s funny because it mimics the truth. Algebra’s notorious word problems deliberately obscure the path to their solution as a way to hone methodical as well as mathematical skills. But a convoluted story filled with mysteriously related numbers is also the essence of life, just as it is in algebra, which is a method for finding answers when you don’t know what you’re doing.

Solving the problem of influenza in general and COVID in particular requires knowing things we don’t know now and may never know in the future. It resembles the puzzle posed by Johnny’s train. At the very least, we must have the time when it left the station and its average speed en route. Yet, because there is no way to know those things, Johnny’s problem is unsolvable. The joke stems from the presumption that the problem could be solved by an expert, someone who knows the trick for finding the answer without apparently knowing how. The joke regarding COVID is on us.

Presumptions about the limitless power of expertise are embraced by people who don’t know enough to laugh. A humorless public demands that politicians and their “experts” solve insoluble problems, particularly the really insoluble ones, like those involving life and death or health and happiness. Politicians who cannot deliver the answers may become aloof and dictatorial to mask impotence. Experts who don’t know either the answers or how to find them may grow officious to hide incompetence. All their failings and bluster might be annoying, even oppressive, but they are unrelated to the real problem. Again, the real problem is unsolvable.

In the practical world of disease and railroads, the public wants these problems solved because they are dangerous if ignored. In Johnny’s case, his train could compromise all the railroad’s timetables, requiring significant caution in the dispatch of other trains. Imagine a supposedly omnipotent expert declaring, because he has to — but out of thin air because he really doesn’t know — that Johnny’s train will arrive at its destination at 3:45, but adding that it will be at 3:45 two weeks from now. The expert has not solved the problem but has only bought some time. How many additional time-buying ploys — 2:35, three weeks from now; 4:15, two months from now — will the traveling public believe, let alone tolerate?

To be ready for lawyered-up passengers, the railroad would go the extra mile. Or, more precisely, it would not go any miles at all. It would shut down operations.

We can guess the public’s reaction. At first, even marooned travelers would be grateful for caution in the face of potential harm. But we can also suppose that eventually they would grow impatient and then angry. In the end, the risk-averse answer to a problem with no solution always raises the discomfiting question, “How do you like them apples?”

Of course, the answer depends on who’s to blame for withholding the information necessary to solve the problems. The author of the parodic word problem is anonymous. The author of our big two-act COVID tragicomedy?

Even little Johnny knows the answer to that one.