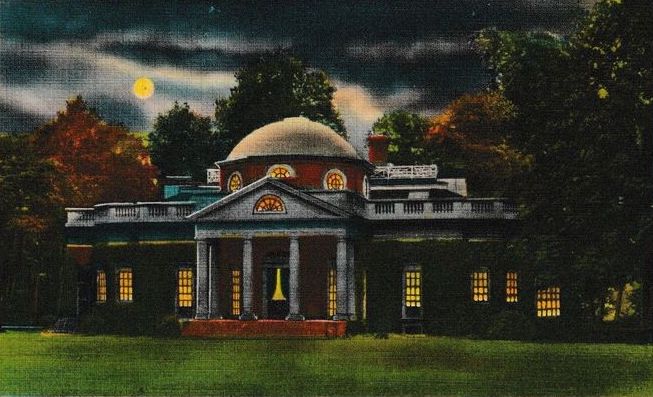 In his bedroom at Monticello, a bureau drawer was always locked. He kept the key on his person and must have opened the drawer only when alone, likely late at night with a candle lighting his desk. There he would place the small box and open it. It is impossible to know how often he did this. Possibly it was not often, but indeed occasionally. The contents were odds and ends, a scrap of paper with a verse, something handwritten, other assorted souvenirs. The most prized possession was in an envelope. He would study these things for a while and then gently place them back in the drawer, lock it, and slide into bed. The clocks ticked. He would not allow the sun to beat him to his work. He never had.

Peter Jefferson’s son had always been bookish. Still, like his father, Tom developed a passion for the outdoors, sunshine, riding fast horses perilously at their limit, and observing terrain along with the flora and fauna that lived on it. Like his father, he grew tall and athletic with a shock of red hair, a freckled complexion, blue eyes, and an open expression that matched his open mind. But Tom was different from his father, mother, and siblings. He kept to himself and spoke softly. His temper was mellow, and his tendency to withdraw and spend time alone made him introspective and bashful.

It hampered his relations with girls, for the ordinarily cheerful fellow could be hopelessly melancholy in the company of a pretty lass. He acted aloof to disguise his bashfulness, but girls misinterpreted the pose as indifference, or worse, disdain. Meanwhile, he kept to himself, wrote bad poetry he never sent, lamented his loneliness to friends, and marveled at how his agile mind could be so dull and plodding when blinded by soft eyes and a sunny smile.

It is a complaint universal among boys who daydream about cleverly dropping the perfectly crafted phrase, the one that’s sure to cause first downturned eyes and then slowly raised ones, newly alight with affection, just as dazzled as they are dazzling. Yet for most, these daydreams always go wrong. The phrase isn’t clever to start with, and it’s stammered into a hopelessly stupid thing. If the girl is kind, her eyes will twinkle, not at all dazzled but at least amused. The dance is an old one. Girls know it by heart; boys learn it by heartache.

When fairly young, Thomas Jefferson proposed to at least one young lady. He was miserably in love, but his idea about delaying marriage until he had traveled Europe to increase his fund of knowledge struck Rebecca Burwell as singularly unromantic if not downright peculiar. She said no.

A bit older and wiser at twenty-three, Jefferson eventually set his cap for Martha Skelton. She went by the diminutive “Patty.” She was a widow of only two years, a delicate young woman with limpid eyes and ashen hair who combined an extremely appealing appearance and a lively mind. She had other suitors, but Tom was determined, and he won her heart. They were married on January 1, 1772, and commenced a life that seemed like a fairy tale, beginning with the adventurous wedding trip back to Monticello: the two were snuggled in a sleigh that Jefferson expertly guided through a blizzard in the dark, finally arriving so late at Monticello that everyone was in bed. The only habitable part of the partially finished house was a one-room “pavilion” destined to become a dependency, but he built a large fire in its small hearth and found a bottle of wine behind some books. The firelight danced and threw shadows as they sipped the wine, and the snow on the sills made for the new lovers a natural curtain. Happily ever after might have crossed their minds.

The precisely right girl and the imposition of the young man’s indomitable routine could not diminish life’s ambiguities, however, and some came as heartbreaking surprises. By the outbreak of the American Revolution, only two of their six children had survived childhood, with each loss seeming to drain a bit of Patty’s vitality away. Worse was what the war did to Patty. Hurried from Monticello under threat of British capture, she never fully recovered. When she became pregnant again, the difficult term and birth left her dangerously weak, and as the weeks passed, she faded away, flickering out on September 6, 1782. Happily had been decidedly mixed; ever after did not last beyond her thirty-three years.

Nobody has been able to gauge with any adequate measure what Patty’s death did to Thomas Jefferson in the long run. In the immediate sense, it drove him close to stark madness. Discipline was damned. He lay abed staring, seldom speaking, sometimes to bolt out of the house and throw himself into the saddle of his fastest horse to pound away at remote paths canopied by colorful leaves, also dying. Everything was dying. His oldest daughter Martha talked to him, stroked his forehead, and brimmed with worry that her papa was dying too. He wished he could. Placid as if bewitched, he would burst into tears, refuse food, and then eat only crumbs. The sun, stars, moon meant nothing to him. Patty was dead.

This went on for weeks, and reports seeping out, incomplete as they were, deeply worried his friends. John Adams thought Jefferson might kill himself. A month and a half’s wallow in grief seems to have allowed Jefferson to find the bottom of his despair. His clawing climb back to the land of the living began with small gestures such as personal grooming, regular hours, letters read and answered. He rode with young Martha, who accompanied him on quieter paths and whose quiet smile when he slipped toward melancholy seemed like sunshine. He reentered Congress and eventually served in Paris to help Adams and Benjamin Franklin negotiate trade treaties. He succeeded the retiring Franklin as the United States minister to Louis XVI.

When Jefferson came home for what he thought would be a brief visit in 1789, he had hardly made landfall before learning of his appointment by President George Washington to head the new government’s State Department. A newspaper story was his unofficial notification, and he wasn’t pleased. In trying to refuse Washington’s invitation, Jefferson was as blunt as he dared, but his reservations unintentionally provided one of the most glaring understatements in American history. By taking the job at the State Department, he said that he could not “but foresee the possibility that this may end disagreeably.”

As he braced to leave his little mountain and join the cabinet, he paused first for family, always first in Tom Jefferson’s world, always returning to the small treasures in the bedroom bureau. For Patty’s death wasn’t the end of the story. Instead, the items he gazed on became an endless epilogue grounded in remembrance and remembering, a cherishing of the time when he did not stumble over his words, and the girl didn’t laugh but looked down and then up. The little box held her handwriting, her mementos, and in the envelope, the thing most prized, delicate strands of ashen curls. Once upon a time, they had meant happily ever after.