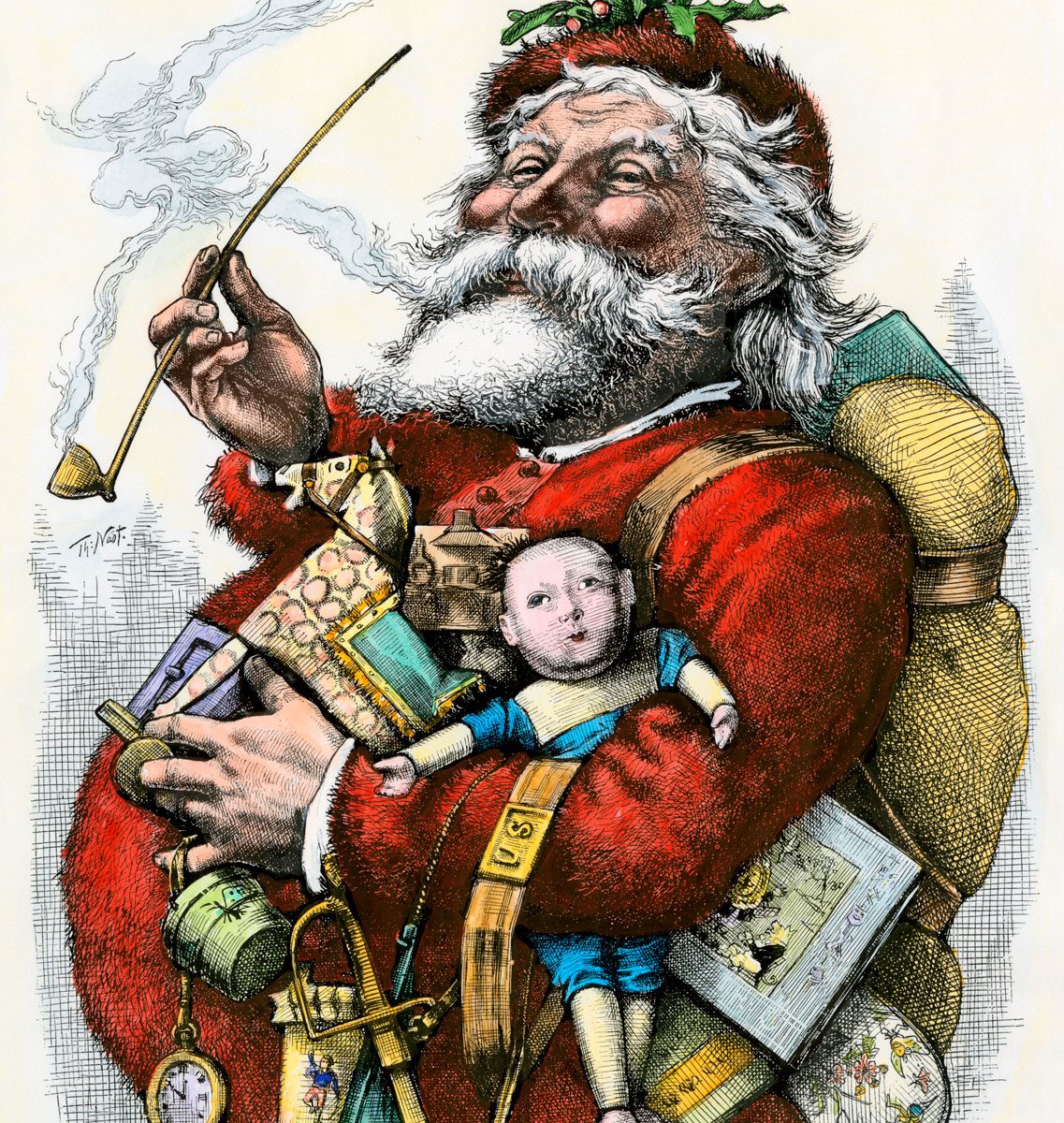 Santa Claus, the jolly, portly fellow dressed in fur-trimmed crimson clothes and sporting the long white beard, is unique to America. Other cultures have a long history of gift-bringers, but Santa in the United States has a special identity, the result of melding religious symbolism, Old World lore, and Dutch folktales. And, of course, he also requires more than a dash of whimsy. That was supplied by a talented storyteller, was enhanced by an unlikely poet, and was made visible by a couple of artists, all working independently.

Let us contemplate that, and if afterward you remain a skeptic who doubts Christmas magic, read on.

The religious part of the recipe is ancient. Saint Nicholas was a fourth-century Christian bishop from Greece who became legendary for many acts of kindness that included anonymous gifts. By the time of his death, he had become the patron saint of merchants, brewers, and cities on one end of Europe (in Russia) and the other (in Holland). His travels throughout the Mediterranean world featured miracles in abundance. He calmed stormy seas with a wave of his hand (making him the patron saint of sailors) and saved impoverished girls from prostitution by dropping bags of gold down chimneys to use for husband-attracting dowries (making him the patron saint of virgins). Being the patron saint of sailors and virgins might have seemed a conflict of interest, but remember Nicholas specialized in miracles.

The giving of gifts on Saint Nicholas’s feast day of December 6 was a way to emulate his generosity, and over time the spread of Christianity conflated the tradition with the mass celebrating the birth of Christ. Nicholas had attended the Council of Nicea, the confab in 325 that mulled over the nature of Christian divinity, and according to some accounts, he was the principal advocate for the doctrine establishing the divine birth of Jesus and setting its date on December 25.

We now have in place the attire of the bishop’s crimson robes trimmed in ermine, the long iconic beard of medieval saints, the tradition of secretly given gifts, the reason for doing so, and the date for doing it.

Next, the Old World Lore. The Dutch revered Saint Nicholas as Sinterklaas, but they also melded him with Kris Kringle (originally Krist Kinder or the Christ child) to fold saintly symbolism into religious observance. Kris Kringle wore a low, broad-brimmed hat, smoked a long-stemmed pipe, and flew a magical horse and wagon over trees and rooftops while dropping fruit and sweets down chimneys for all to enjoy.

English folklore had a similar figure in Father Christmas. He was always merry and not shy about showing it, but English Puritans were not at all amused. We might shake our heads over those sour old folk always worried that somebody somewhere was happy, but that oversimplifies their objections. They saw Catholic/Anglican observances of Christmas as unseemly pomp veined with repellent paganism.

They didn’t object to Father Christmas because he was happy. They banned him, as well as the celebration of Christmas itself because they thought both were sacrilegious. For many years in Puritan New England, it was illegal to celebrate Christmas on pain of a 5 shilling fine. These English settlers brought many fine things to the New World, but in our story, they are no help, no help at all, in bringing Santa Claus to American shores.

Dutch settlers in the New World, on the other hand, brought Saint Nicholas as their patron saint in their very first migration to the New World. The figurehead on their sturdy ship taking them from Amsterdam to the mouth of the Hudson River was not pagan Neptune or a mythical mermaid, but Sinterklaas complete with his pipe, its stem as long as the bowsprit.

The Dutch planted the old boy on North American ground. They also brought the tradition of the magical wagon and the gifts, but these were increasingly meant only for good children in celebration of the Christ child. Bad children were left a birch rod, the implication ominous. Because children were the exclusive recipients, and because they were sorted according to behavior, Sinterklaas stopped dropping gifts willy-nilly down chimneys and began coming into houses. Kids hung their stockings on bedsteads, but convenience recommended the hearthside. Kris Kringle was accustomed to using chimneys, and he even had a smart way of using them to exit: he put his finger on the side of his nose and winked.

We have thus added the pipe, the flying conveyance, and chimneys as portals of preference. These by themselves supply a goodly measure of whimsy, but next we need a systematic storyteller to spread the whimsical word.

Cue Washington Irving. In addition to being a clever stylist with a keen imagination and a facile pen, he had a sense of humor broad enough to convey the preposterous when needed and subtle enough to avoid making fun of his characters while making them fun.

Irving’s 1809 “history” of the Dutch settlement of New York included episodes in which Saint Nicholas showed the way to the site for New Amsterdam and commenced his annual visits to give treats to good children, coal and birch rods to naughty ones.

Washington Irving’s story isn’t really about Santa Claus but only features him in several colorful asides, but they were sufficiently vivid to summon an image that in a few years was enlarged on by, of all things, a college professor. This was the eminent theologian Clement C. Moore.

There was a good deal more to Moore than met the eye. He hailed from an affluent family, married into a wealthier one, and moved in the heady circles of New York’s intellectual elite of artists, philosophers, and writers dubbed the Knickerbockers. Washington Irving was a Knickerbocker.

Moore was renowned for his scholarship. He compiled an exhaustive dictionary of Hebrew and wrote an acclaimed biography of Albania’s king, George Castriot. But he was hardly an old, fusty bookworm. With his wife Catherine, he had a boisterous family of happy children, and beneath his deliberative academic demeanor beat the heart of a poet.

On Christmas Eve 1822, Moore was on his way to a New York market and heard passing sleigh bells ringing in cadence to their haltered horses. It was an enchanting, silvery sound that made him smile and then ponder. When he returned home, he dashed off a few verses in the darkening study of his Chelsea mansion. He thought the children — six by then — would find his little poem amusing during the celebration planned for Christmas Eve. He titled it “A Visit from St. Nicholas.” All of us know the opening lines by heart:

Twas the night before Christmas

And all through the house,

Not a creature was stirring,

Not even a mouse.

Moore described Santa Claus as a jolly, rotund elf, a variation of Irving’s Dutch uncle that transformed him into a figure more recognizable to modern imaginations. Santa was able to fly, but eight tiny reindeer, rather than a horse, pulled a magical sleigh, not a wagon. An avid reader such as Moore would have certainly known his fellow Knickerbocker’s tales of New York, and doubtless Irving’s stories of Saint Nicholas influenced him. Like Sinterklaas, Moore’s elfin visitor puts his finger to the side of his nose to ascend the chimney. Moore, however, also knew a plump, bearded Dutch tradesman who always laughed and smoked a stumpy pipe. Imagination and experience perhaps had a coincidental rendezvous that afternoon in Clement Moore’s study.

Sugarplums danced in the imaginations of the Moore children as they listened to their father read the charming story on that Christmas Eve nearly two centuries ago. He always meant to keep it private. For one thing, it was a special treat for his family, but it was also hardly the sort of thing that a staid theologian would want to be published.

But it wound up in print exactly one Christmas later when a friend of the Moores sent it to the Sentinel, a newspaper in Troy, New York. The editor kept the good doctor’s name off this first publication, but eventually, Moore was revealed as the author, as was only right.

Another member of the Knickerbockers was the artist Robert Weir. Regular readers of these little essays will know Weir’s work from our Thanksgiving post a couple of years ago, for Weir painted the scene of the Pilgrims’ embarkation that appears in that offering. In the mid-1830s, Weir was in a fanciful frame of mind when he painted Saint Nicholas. He has just delivered his loot and is preparing to pop back up the chimney. In Weir’s depiction, St. Nick has a mischievous grin, is snapping his fingers, and has placed his finger on the side of his nose. A familiar set of gestures.

Lucky collectors, rather than a wide audience, gazed on this bit of fancy, for Weir’s painting was (and is) a rarity — only six of them survive — and does not seem to have shaped and therefore advanced the public’s visual perception of Santa Claus. For that part of our story, we turn to Thomas Nast.

Nast was a crusading cartoonist who specialized in skewering politicians and advancing causes with symbols and caricatures. His work appeared in the most prestigious journals over a long career that took wing during the Civil War and spanned the balance of the nineteenth century. For the cover of Harper’s Weekly January 1863, he drew “Santa Claus in Camp” with the traditional cloak replaced by patriotic stars. Santa is perched in his sleigh and hands out gifts to astonished Union soldiers.

Subsequent drawings by Thomas Nast, some washed with watercolors, completed the picture of this jolly gift-giver in red, a plump and bearded bundle of jollity who lives at the North Pole with his tiny reindeer while elves merrily build the toys he will bring to households everywhere at Christmas.

The long passage of discovery from the 300s spanned a thousand and a half years while many minds, many eyes, many imaginations, and many hearts did their part tugging the legend to the place of our time. The saint, the wanderers, the tale spinner, the scholar, the painter, the cartoonist were crucial to the journey and the story it tells. Perhaps chance and coincidence guided them only to a place of myth, an imaginary palace of superstitions and silly spells.

But hang on. Possibly, just possibly something else has been happening all along the way. The Dutch mariners, the droll storyteller, the theologian, the artists, all of them might not have been so imaginative after all.

Perhaps they did not invent Santa Claus. Maybe all of them, in their own time and way, saw him.

So as Christmas this year awaits its good time to work its annual miracle, you try it. On Christmas Eve, when nothing in the house is stirring, not even mice, close your eyes half-way.

See? We told you there would be magic.