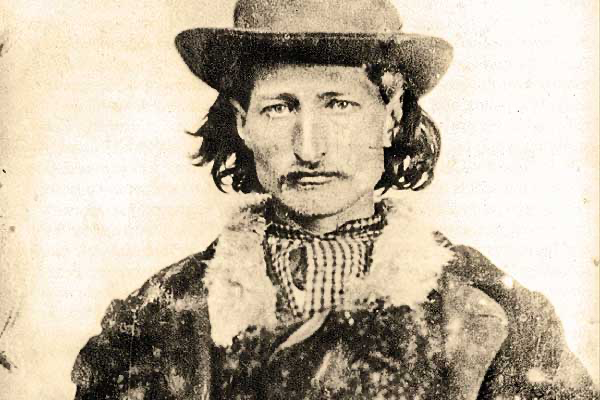 Witnesses said the trouble between Bill and Dave was over a watch, but possibly a woman was part of it. They had become friends, after a fashion, when both fetched up in Springfield, Missouri, after the war. Dave was a former Confederate soldier, and Bill was out of his job as a Union army scout and spy. Bill didn’t care that fate had thrown one man against another for the previous four years. The war was over, and he didn’t see much point in stoking old hatreds and picking at still angry wounds. Dave Tutt seemed a nice enough fellow, for an Arkansas Reb. He was easy to drink with and apparently ready to put the war behind him too.

They hoisted glasses together, alright, but when Bill gambled, Dave kept his distance, wary of a man who seemed lucky enough to beat all creation. He didn’t cheat; nobody ever said Bill cheated. He was just cussedly patient at cards, sometimes losing, more often winning. Dave Tutt stayed away from that action, but for some reason, Bill’s winning riled him, and he had taken to staking players sitting at Bill’s table. When they lost, they were often losing Dave Tutt’s money, and one afternoon he finally bristled. Bill owed him a previous debt of $45, Dave barked. The room abruptly went hushed.

It wasn’t because of Bill’s reputation. At the time, he didn’t have a reputation other than for having served in the war, but that was the same for all of them. Everyone had a passable competence with firearms, but there was something about the way Bill spoke that made a fellow think. Sometimes he said things so quietly that you’d have to strain to hear him. There was also something about how he looked at you, something spooky-like, his blue-gray eyes blank, his face expressionless, as if gauging a man’s mettle. Nobody could tell why. Nobody wanted to find out.

So the room went quiet, but Bill didn’t pause to stare at Dave Tutt. Instead, he thumbed out the money and handed it to Dave. Dave was the one who paused, flummoxed because he had been affably satisfied. He then blurted out that Bill owed him another $35 for a previous loan.

Dave did more than disagree. He snatched Bill’s watch from the table and said he’d hold it as collateral against the debt. The timepiece was a pricey gold Waltham. Everyone froze as Bill surveyed the men crowding around the card table. It was his unsettling gaze. Most of the men were Dave’s friends. They stood very still.

“All right,” Bill finally said, slowly. Witnesses remembered what Bill said next in various versions, for there were always “various versions” of stories about Bill. The gist of what everyone remembered was: “Just don’t make a show of it.”

The following day, Davis Tutt made a show of it. He openly wore Bill’s watch as he strolled around Springfield’s public square. Somebody told Bill, and he came out. Again, accounts differ about the exact words, but most agree that Bill wearily said, “I’ve thought about it, Dave, and maybe you’re right about it being $35. I can get that to you.” Incredibly, Dave Tutt shook his head and said he’d been thinking too, and he now remembered it as $45. Bill paused. Then he repeated that if Tutt insisted on holding the watch, he wasn’t to wear it.

Tutt didn’t respond. He strolled away. People remembered Bill simply nodding, as if to himself, before he turned and walked away too.

It was late that afternoon around 6:00, a hot July 21, 1865, when Tutt was again walking the public square with the watch hanging from his vest. Bill came striding from the opposite side of the square, holding one of his two pistols in his hand. Everyone who saw him scattered, including Davis Tutt’s friends. They gathered together in a small cluster behind Bill.

“I told you not to come across showing it,” Bill called out to Tutt, who was about a hundred paces away. Bill then cocked the hammer on his Navy Colt and stuffed it back into his belt. He didn’t like holsters and always kept his pistols either in a sash or belt, waist-high, with their butts forward. The two men slightly pivoted in place to face each other sideways as if by instinct. Standing that way presented a diminished target.

And then, in a blink of an eye, it happened and was done. Tutt drew his pistol. Bill did the same by executing a “cavalry draw” where the right hand reaches between the pistol and the body with the wrist turned and the thumb facing the back. The hand pulls the pistol from the belt and flips the muzzle toward the target. Cavalry and mounted scouts perfected the maneuver’s speed during the war because it was easier to do on horseback. Bill liked it because it was also easy to perform while sitting, such as with strangers at a poker table.

Nobody had any idea how swiftly this man could turn his wrist and flip a pistol toward his target, but hours upon hours of practice had made him faster than the eye. People watching never saw Bill’s gun move from his belt. They just saw it resting on his left forearm for a better, deadlier aim. Davis Tutt’s shot missed. Bill’s shot hit Tutt’s heart.

He didn’t see him fall. As Tutt staggered a few steps before crumpling to the ground, Bill had already wheeled to face Tutt’s friends with the Colt revolver recocked. Some recalled him saying something like, “Are you satisfied?” in a voice chilling for its calmness. He could have been asking about what you thought of a cup of coffee rather than a corpse. Some also remembered his warning that there would be more corpses if anyone drew a gun. If uttered, the extra words were superfluous.

On Springfield’s public square after the instant of lethal violence, Bill had the same expressionless eyes, the same level stare, the same quiet tone of voice as he had over a drink or when flipping over his cards to show his three deuces that beat your two pair.

Nobody drew a gun.

Possibly it wasn’t only Bill’s menace. It was difficult for people to absorb what had just happened, for nobody had ever seen anything like it. Possibly some southerners in the crowd at Springfield had witnessed the ritualized violence of a duel. However, they were formal affairs with rigid rules governing the challenge, time of appointment, and behavior of principals and their entourages. But such events were rare and often ended with last-minute reconciliations. The gunfight between Bill and Tutt was not like that.

It also wasn’t like what many men in the crowd had seen when arguments turned violent. Ordinarily, things just got out of hand with raised voices yelping hollered threats full of profanities. Provocations finally spurred a temper tantrum featuring firearms. Cheap pistols and lousy ammunition could leave everyone pretty much unscathed when the dense black-powder gun smoke cleared, and men would sullenly part. Bill’s Navy Colt wasn’t cheap, and in the hands of an accomplished marksman, it was highly accurate.

It was also clear that the fight between Bill and Dave Tutt was anything but spontaneous. Yet, in everyone’s experience, premeditated violence wasn’t for a show but for settling a score. It was accomplished with an ambush by hidden prey on an unsuspecting quarry. Two men standing in a public place with their hands empty and weapons tucked, staring across a distance at each other, and then making reflex and marksmanship a matter of life and death had never been seen before. Until July 21, 1865, it had never happened.

The Union army was the law in Springfield, and Maj. Albert Barnitz had Bill arrested for murder, a charge later reduced to manslaughter. Friends posted his $2000 bail, but when temporarily freed, he didn’t run. Bill didn’t believe he’d done anything wrong.

Neither did the jury after hearing the evidence on August 5, including the various versions, which essentially distilled to the same thing: Davis Tutt had provoked a quarrel while rebuffing several attempts to settle it peacefully. The judge was convinced that Tutt had drawn his pistol first. The shots were simultaneous, witnesses said. The jury called it self-defense and acquitted Bill in fairly short order.

Bill was twenty-eight years old and originally from a little Illinois town called Homer. His folks had named him James Butler Hickok, but ten years in the “West” had seen him accumulate a variety of nicknames and monickers, which was the place’s custom. He preferred J. B. Hickok, but years earlier in Nebraska, a man called him “Duck Bill” because of his nose and protruding lips, and at least part of the name stuck. When he worked for the Overland Stage company a while, his fellow drivers called him “Shanghai Bill” because he was tall (6’1”) and lanky. During the war, though, when cavalrymen and fellow scouts saw the ordinarily quiet and retiring fellow take incredible risks and kill with the precision of a machine, they took to calling him “Wild Bill.”

Davis Tutt thought the name was a joke played on a quiet and retiring fellow, like dubbing a slowpoke “Lightning Joe.” It was how Tutt wound up making history that July afternoon in Springfield. A writer for Harper’s Monthly Magazine, a New York publication with a national readership, wandered into Springfield looking for colorful copy shortly after Bill had killed Tutt, and both the event and the man seemed the perfect subjects. J. B. Hickok was soon introduced to the nation as “Wild Bill Hitchcock,” getting his name wrong and inventing much of his past, but also making him famous almost overnight as an archetype: the laconic, square-jawed pistoleer of the Old West, free and unencumbered, unmolested if people knew what was good for them, untethered by habit but willing to tame rowdy towns, face down swaggering drunks, and kill those what needed killing.

Harper’s story described Bill’s appearance in iconic terms. He was tall, physically powerful, with long hair to his shoulders and a mustache that drooped to his jaw. It especially noted “Wild Bill’s” eyes as “piercing,” which was true for even casual observers.

People who came to know him well, however, developed a different impression. A man’s eyes are possibly a mirror on his soul. If so, J. B. Hickok was always vaguely distant and mildly sad, the antithesis of “wild,” the realization that days are numbered.