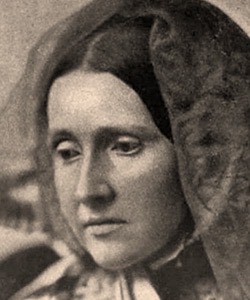 When the nineteenth century was winding down, and she had become an old lady, Julia Ward Howe had her palm read by “an expert.” The reader traced the wrinkled lines and exclaimed, “You inherit military blood; your hand shows it!” Possibly it did. Howe had martial forebears on both sides of her family. One was South Carolina’s Revolutionary War hero Francis Marion, the celebrated “Swamp Fox” who had bedeviled the British while hiding with his brave band of patriots in Low Country marshes.

Yet the lady with the pugnacious palm hated war. She had tried to organize mothers of the world against it, even to the point of holding a Women’s Peace Congress and lobbying for a worldwide Mother’s Day fifty years before Anna Jarvis persuaded Woodrow Wilson to proclaim the second Sunday in May as such. Mrs. Jarvis wanted mothers memorialized; Mrs. Howe had wanted them mobilized.

One wonders if the chiromancer saw a poet’s line in Mrs. Howe’s hand. Her mother was the delicate Julia Cutler, grandniece of the old Swamp Fox, and a talented versifier who published at least one of her efforts and might have done more if husband Samuel Ward hadn’t been such a controlling stick in the mud. He married Miss Cutler when she was but a lass of sixteen, and she was probably never happy afterward. She had only eleven years remaining before tuberculosis killed her, but the decade was filled with seven children, including a little girl she lost, the daughter named Julia, who died at four and was always remembered as “the first little Julia” when her namesake came along in 1819. The second little Julia barely knew her mother — she was only five when her mother died — but she recalled her from scattered pieces of verse that were deeply religious.

Both traits lived on in her daughter. The second little Julia would openly embrace the poetry. The piety for a time was a bit more subtle. She grew up pampered and cosseted, schooled by tutors in her wealthy father’s mansion until she was powdered and ribboned and sent to fine finishing schools, as if she needed them. Julia Ward became a voracious reader with a lively mind that found German philosophers more compelling than John Calvin. She could hold her own with famous people, Charles Dickens among them, who moved in Mr. Ward’s exclusive social circle, and almost from the beginning, she was writing prose as well as verse. Everything she put on paper was interesting — hearing one of her poems, Ralph Waldo Emerson told her that he liked its “architecture” — but not until the Civil War would she produce something that made her justifiably famous.

By then, she had been married to Dr. Samuel Gridley Howe for twenty years. Howe, whose nickname was the lighthearted “Chev,” was anything but lighthearted. Instead, he was a dour philanthropist with a strangely hard heart. His and Julia’s was an odd union, in any case. In addition to being almost 20 years her senior, Howe had possibly been in love with Julia’s sister. He also disapproved of Julia’s scribbling and the possibility that she could become a public figure, which made for a stormy journey nonetheless punctuated by six children. The kids arrived amid perennial talk of divorce, always followed by grudging reconciliations. Turbulent home life seems to have agreed with most of the Howe offspring, and some proved extraordinarily hale. Maud Howe died at 93 in the year that Harry Truman was elected.

Like most Americans, Julia Ward Howe saw the Civil War as the titanic definer of her time. “Its cruel fangs,” she remembered, “fastened upon the very heart of Boston, and took from us our best and bravest.” She, her husband, and friends visited Abraham Lincoln in the White House during the war’s first year, and she was struck by how despondent he looked and how very different he was from people in Boston. She would always recall how he had pronounced “heard” as “heerd,” but unlike many of her contemporaries, she did not let a regional dialect confuse her about Lincoln’s mental agility.

Not long after the visit, she and Chev, along with the theologian James Freeman Clarke, were watching a review of forlorn soldiers — in the opening year of the war, Union soldiers were always forlorn — when one of their number, Sgt. John Ticknor, began singing “John Brown’s Body,” a soulful tribute to the abolitionist. Although you’ve likely never heard the song “John Brown’s Body,” you know the melody, and here’s why. Clarke suggested to Mrs. Howe that she “write some good words for that stirring tune,” and those words came to her at dawn the next day. In her room at the Willard Hotel, she scribbled them in the half-dark with the stub of a pencil. Surveying her work, she thought, “This is better than most things I have written.” Mrs. Howe didn’t know the half of it.

After it was published in 1862 in The Atlantic Monthly, the “Battle-Hymn of the Republic” so impressed a friend that he concluded, “Mrs. Howe ought to die right now, for she has done the best she will ever do.” Put to the tune of “John Brown’s Body,” her verses became lyrics sung by Union prisoners of war in Confederate jails and Union soldiers in tented bivouacs for solace in defeat and the celebration of triumphs.

She was right in her judgment about a superb piece of work. While everyone knows the opening lines about “the glory of the coming of the Lord” and “the vintage where the grapes of wrath are stored,” less familiar is the closing stanza, which drops militancy for a call to sacrifice, and for a cause that Lincoln himself was still not quite ready to advance. Mrs. Howe was never cautious, and in her masterpiece, the poet at the end openly embraces her piety:

In the beauty of the lilies Christ was born across the sea,
With a glory in His bosom that transfigures you and me:
As he died to make men holy, let us die to make men free,
While God is marching on.

Five years after the Civil War, a clash in Europe so disgusted Mrs. Howe that she resolved to do something about people’s propensity to kill one another. She was no admirer of Louis Napoleon, but she found Prussia’s behavior in first provoking and then prosecuting the Franco-Prussian War execrable. She had already become an inveterate founder of action committees and a joiner of special causes. The events of 1870 inspired her to promote the most significant cause of all, eliminating war.

She wrote an “Appeal to Womanhood” that lodged her demand as an indignant question: “Why do not the mothers of mankind interfere in these matters, to prevent the waste of that human life of which they alone bear and know the cost?” Under the heading “Mother’s Day Proclamation,” the statement marked the opening of a 2-year campaign to call upon “the august dignity of motherhood” to end all war through an international Peace Crusade. As part of that, she planned to establish “a festival” to celebrate “Mother’s Day” on June 2 because flowers would be blooming and the weather would be mild enough for outdoor events. Mrs. Howe thought the teeming masses of women intent on saving their sons from future Gettysburgs and Sedans would need open-air venues.

It never caught on. Julia Ward Howe would later sigh that Boston and Philadelphia had gamely tried to observe her Mother’s Day for several years. Even faraway Constantinople had staged a couple of annual celebrations. Still, Europe calmed down for a while in the aftermath of German unification, and kerfuffles of empire-building in far-flung outposts didn’t approach the scope or scale of Grant’s Overland Campaign or the grim Prussian march on Paris. She took up other less grandiose causes. Gradually, her poetry became less read, her presence less noticed, and finally, the public’s memory distilled her lifetime of work to the “Battle-Hymn,” and almost exclusively to its opening lines.

Julia Ward Howe had been dead four years when Woodrow Wilson signed the proclamation that established the Mother’s Day that we now observe, but just as it had been with the ending of slavery, she had thought of having such a day long before. And just as she had done about ending slavery, she had written about a “Mother’s Day” with moral fervor and eloquent purpose.

In her final years, she penned this meditation:

My journey nears its close — in some still haven
My bark shall find its anchorage of rest,
When the kind hand, which every good has given,
Opening with wider grace, shall give the best.

A perfect melding of verse and faith had at the end made Julia Ward Howe a woman like her mother, though with a voice that resounded around the globe, at least for a time. It was the second little Julia’s heartfelt emulation of a good, kind woman who had not seen thirty. Bolstered by achievement, it was the best Mother’s Day gift of all.